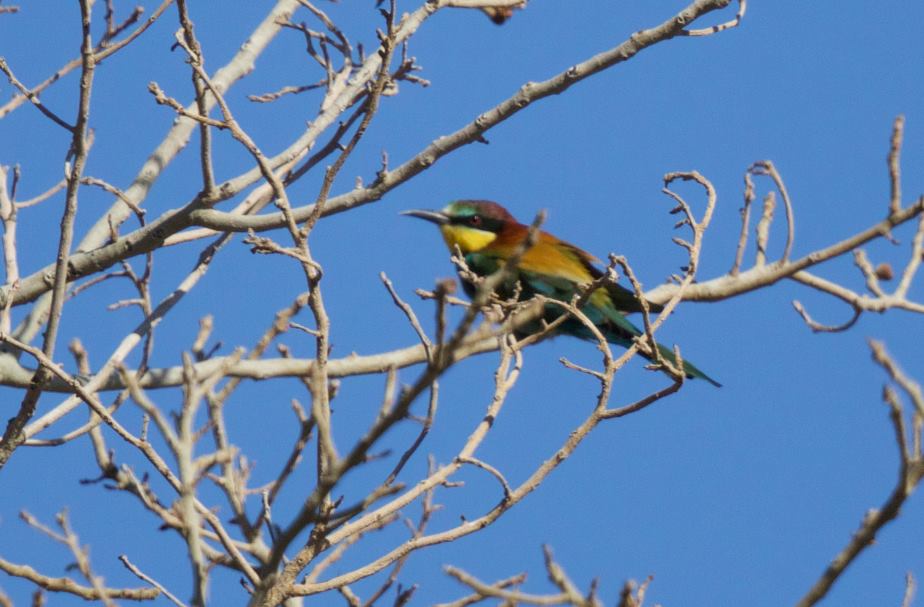 The European bee-eater is a richly-coloured bird of approximately 28 cm in length and a slightly downturned thin beak. They catch large insects in flight by sorties from a perch. An exceptional eyesight allows them to locate preys at a distance up to 20 meters, so they eat flies, dragonflies, butterflies wasps and of course bees, hence its common name.

Bee-eaters nest in almost every kind of habitat but they avoid high mountain areas and dense forests. They dig their nests in slopes or banks where they build a small chamber to lay 4 to 6 eggs that will be brood for approximately 20 days. Three weeks later the newly hatched birds will show their heads out of the nest and on the fourth week  they will start flying.

Bee-eaters at the Palmetum

Merops apiaster is only occasionally seen in the Canary Islands, because it is a transaharian migrant that only visit the islands shortly. In March and April Merops return to Europe and their route to the north follows the coast of Morocco. Some specimens are displaced by the winds and stop in the Canaries for a few days. In the palmetum they are observed during these months, hunting insects in open spaces. The autumn migration in contrast, coincides with a season of low-windiness, so bee-eaters do not usually reach the islands.

Merops apiaster is legally protected in Spain. It is threatened by the destruction of the slopes they occupy and the use of agricultural pesticides, which affects the bird and its prey. The Palmetum, which for years has rejected the use of pesticides, has become an ideal place for them to stop by.